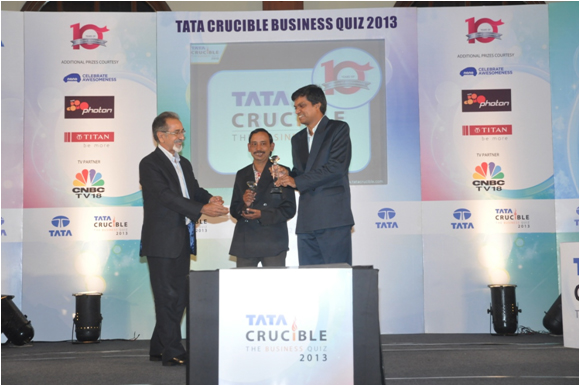 After a riveting set of quizzes for the Kolkata regional rounds the stage was set for the first ever zonal final for corporate India at Tata Crucible. Six champion teams from Bhubaneshwar, Guwahati, Vishakapatnam, Raipur, Ranchi and Kolkata were there to battle for two slots in the prestigious national finale. The line up was impressive to say the least.

The zonals witnessed a tight first round where all team looked equal but soon the duo from Vizag Steel pressed the throttle and started running a marathon like a sprint getting well past the other teams. The key was they could maintain their momentum and ensured they were into the nationals without any issues.

The battle for the second national final slot was tense, close and keenly contested. All the teams tried their bit in bursts but at the end of the quiz it came down to three teams Reckitt, Bhilai Steel and HSBC and the former took a few risks that paid off getting themselves into the finale.

The two teams that made it to the final were reflecting of the modern construct of Eastern India as a senior team from Vizag Steel in its 10th Crucible made it along with a young Reckitt Benckiser for whom it was a debut win.

The guest of honour Mr.Viresh Oberoi, CEO and MD of mJunction, congratulated the teams and wished them luck for the national rounds of the quiz. In a crisp remark about the 10th year of the quiz he said “It is fantastic to see a knowledge initiative grow from within the Tata’s to beyond and to the campuses of India as well”