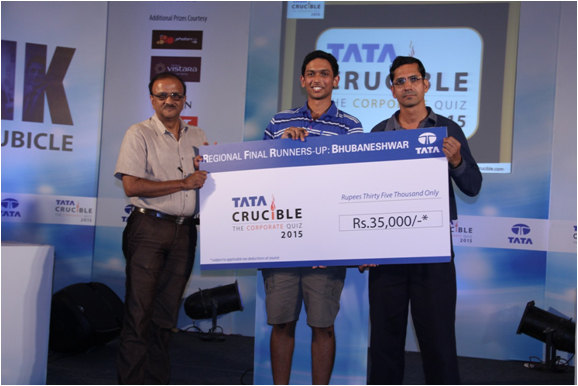 “It’s a city where the quality of the teams has always been impressive” quipped the seasoned quizmaster as he commenced proceedings. His assessment was perfect as the evening unfolded.Teamsdid exceedingly well in the prelim to make it to the finals. The finalists were:

The final was a display of both brilliance and caution as teams played with tremendous maturity and tact. The duo from Infosys were good and scored well but could not hold the pace. The defending champions from XIMB were on the other hand calm and collective scoring at regular intervals which kept them ahead of the others right through the final.

The teams from TCS and Mindfire also looked good in bursts and came close to Infosys but could not get past them. As the quiz moved into the final phases some of the teams made mistakes with the intent of trying to forge ahead.

The team from Mother’s Public School were specifically appreciated by the quizmaster for being the first school teacher’s from the state to have made it to the finale of a business quiz of this stature. At the end of the day, it was a consistent XIMB that qualified to the next round yet again while Infosys finished runner up.

The guest of honour Mr. Siddhantha Das (IFS), Additional Principal Chief Conservator of Forests, Odisha, recalled his days as a quizzer and quiz host and gave away the prizes to the champion teams.